A few trips ago to the butcher with pigs, the butcher asked me if we would like to save the lard from our hog. The word lard brought to my mind the neat little tubs of lard that they sell in the predominantly Amish area in which I grew up. This thought was closely followed by the memory of flaky pie crusts made with lard, and  my mouth began to water. Do I want the lard? Oh yes, I do.

You may imagine my surprise when we went to pick up the meat and there were no neat little tubs of lard waiting for me. No, my lard was in the form of big slabs of fat, like the one pictured below. In fact, there was a whole bag of these frozen fat slabs awaiting me. My mother informed me that I had to render the lard to create my own neat little tubs of the stuff. It sounded like work to me. 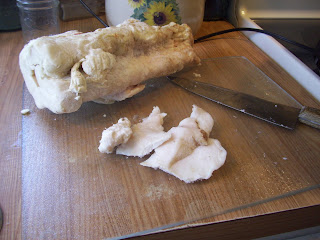 So, the bag of fat slabs went home with me, and went directly in the freezer. I Googled rendering lard, and browsed a few instructions, and put render lard on my mental, "I'll get to it someday" list.  That bag sat in the freezer, and at the bottom of my to do list, for quite some time, about a year I think.

Then a few months ago suddenly there were posts everywhere about people rendering their lard, and I re-discovered that bag of fat slabs in the depths of my freezer, and the kids were out of town with their grandparents for the week. I decided it was meant to be. All these things happening at the same time could only be a sign that it was time to add a little lard to our lives.

To the interwebs I went searching for best way to get the lard that I was seeking. There are 100's of pages out there about rendering lard. You can render it in a large pot on the stove, in a crock pot, in the oven, or in a kettle over a fire. In fact, I think every single page of instructions I read was a little different, but they all involved cutting the slabs of fat into little pieces and applying heat.

So, I cut up some slabs and filled the crockpot. I cut some more and filled a 9x13 baking dish. I cut the rest and filled a pan for the stove, and then I turned on the stove, oven and crockpot to low settings. The heat melts away the fat which eventually boils the bits of meat that are left; the cracklings. 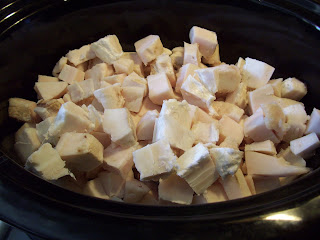 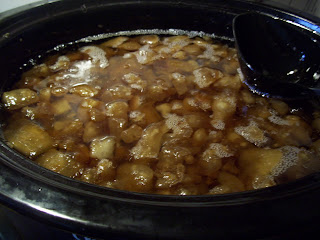 Rendering lard seems to be one of those things you can only eyeball to know when it is done. It is one of those skills that when learning, it would really be nice to have someone next to you who has done it before. I was on my own, and it was a guessing game.

One thing that I somehow missed in all the instructions that I read was how long it takes. It took a long time, much longer than I expected. I started the lard in the afternoon, and by night it still wasn't done. I didn't want to leave the stove and oven on over night. So, I poured off all the melted fat and combined the rest of the fat pieces in the crockpot to cook overnight.

Other people warn of the horrible smell. I didn't really think it was all that bad, until the middle of the night. Maybe it was because I had been in the smell for too long. Maybe it was because a body is not supposed to smell melted pork fat at three AM, but that smell kept me awake that night half nauseous.

By morning I was done with the rendering lard process. The lard really wasn't done rendering, but that is beside the point. As a result, my cracklings were not exactly cracking. The crispy  pieces were quite delicious with a bit of salt, but the majority of them were not crispy. Although I found those soft pieces rather revolting, the chickens did not share my opinion. We let them enjoy them. I did later wonder if the premature pour off of the lard contributed to the under cooking of my cracklings. Something to consider on the next lard adventure I guess. 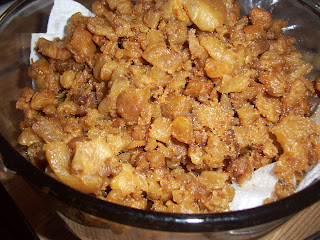 But even with my missteps, five and a half quarts of lard were rendered from my bag of fat slabs. You can see it below in various stages of solidifying. 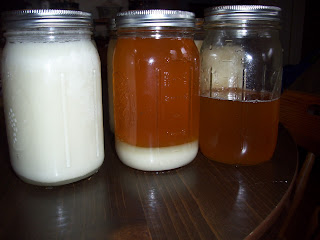 No mouth watering pie crusts have been made yet, but we've been enjoying our lard in other ways. Instead of frying our eggs and potatoes in butter, we've been using the lard. It makes those things taste delicious, and we've found that a little lard goes a long way. We've also enjoyed making cornbread with it.

It took me awhile to finally tackle those big slabs of fat, but I am glad that I did. Next time though, I will start earlier in the day. I will cook it outside on the camp stove in one pot, and not remove any of the fat until the cracklings are done. The process wasn't perfect, but the results were good. That is all part of the adventure of learning new things.
Posted by Stephanie Appleton at 11:53 AM